Most of the classes are about shinto. Today was a reminder that it is quite impossible to discuss shintoism without consideration of buddhism. This is easy enough to get if you consider that there are about 2 million Christians living in Japan, about 92 million shintoists, and about 87 million buddhists. The total population number is 127 million, so you can see that most consider themselves to be both of the latter. Kôno-sensei, a specialist in region studies, gave a wonderful lesson on how both faiths are connected to each other in a syncretistic way. This is called shinbutsu-shûgô: it includes the idea that the kami of shinto are manifestations of the buddha, or the other way round (this raises some interesting gender-questions, by the way, since Amaterasu is decidedly female). So you can find a lot of shrines that have temples included, or the other way around. In fact, a few days earlier, Mayo-sensei made some really good points why it may not be “incredibly helpful” to think of both as seperated belief systems, an idea that might have come up only as late as in the 19th century when shintoism and buddhism were first strictly seperated by the Meiji administration (they even had to, kind of, “invent” shinto burial rites, since this was usually a buddhist domain). A lot of questions came up in the discussion. For instance, it is well known that in shinto you worship your ancestors in shrines, so they can become kami after they pass. At the same time, buddhism clearly values the idea of reincarnation. This seems, one would think, like s strong contradiction. Kôno-sensei explained to me that reincarnation was never much in focus in Japanese buddhism which makes it somewhat special from other “asian” versions. However, as with everything here, the point is that nothing is very dogmatic to begin with, contradictions don’t need to be decided by authority. So you can basically figure this out for yourself.

Afterwards, we went on another Kengaku-tour to the mountainpeak of Asamayama by bus to visit the most important buddhist temple around, Kongôshôji. This might be my favorite location in all of Ise so far, reminding me a lot of the beautiful mountain places in the Kyoto area. Attached to the temple area are buddhist burial grounds with gigantic sotôba, wodden poles for the deceased where friends and relatives place small offerings (we saw quite a lot). The largest were up to 7 meters high. I could have stayed much longer, and this is something to say since it was incredibly cold on the mountaintop. I thought I was dressed warm enough, but when we were allowed to visit the main temple hall (which is normaly strictly forbidden), we naturally had to take our shoes off. After only a few minutes the coldness became literally painful. I am not sure which deity might count that as an offering from my side, but in any case it seemed to work: after the field trip we were rewarded with (naturally) a fantastic lunch in a traditional Ise restaurant. 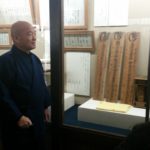 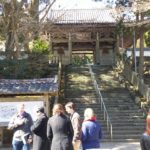 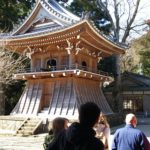 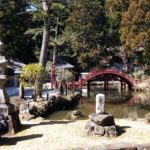 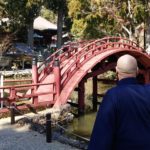 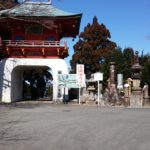 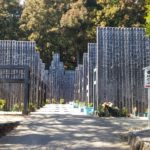 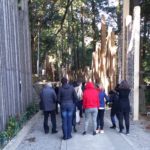 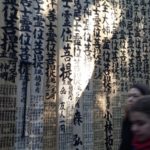 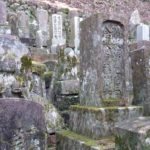 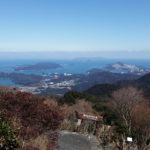