Fresh and genki again today! A beautiful sunny day, and because it is additionally a Saturday, we engaged in kengaku. This means literally “learning by looking”, so: field trips! At first we visited a local factory where kamaboko is produced, the well-known fish-paste you can make anything out of! Sounds easy, but it isn’t, we had some time to figure that out for ouselves. The main event of the day, however, was a trip to the historical sites of Saiku, some 15km north of Ise. There we need some backstory again: When the shrines were institutionalized, a special person from the imperial family was chosen to attend the rituals, selected from the unmarried princesses and appointed by fortune-telling. This person was then called the Saiô. She then prepared for 3 years for a ritual journey to Ise, called “gunkô”, which was a huge event in itself. Anyway, when she arrived near Ise, she would not actually go to the Grand Shrines. That was reserved for only three special matsuri-occasions throughout the year. Instead, she resided at a palace outside, the Saiku. Today, there is not much there that you can see anymore, for the tradition was abandoned in the 14th century, after a line of 66 Saiô-priestesses which lasted 660 years. Some traditions, it seems, are not forever. However, it was very interesting to see actual archaeoligical stires where they are working right now, figuring out more details about the ancient palaces sites. Obviously, it was not just the Saiô residing there, but a household of more than 500 servants. The new museum was one of the nicest I have ever seen, atmosphere-wise, but also in terms of all the installations, models, and an really well-made “historical reenactement”-film that brought the whole story to life.
Oh, and incidently there was a little town festival there today as well where I could meet the local mascot, Ise-mairin-kun, a kind of pilgrim. Nice day! Now out into town for Kaiten-sushi and Karaoke, and tomorrow we are planning for a hike in the mountains. 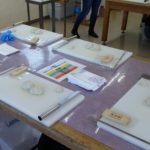 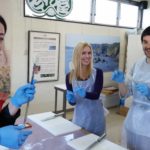 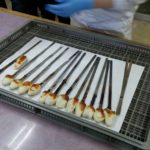 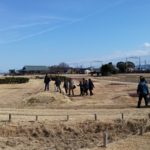 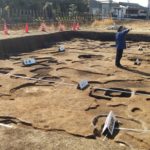 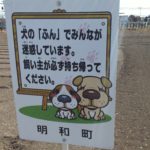 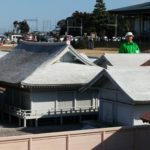 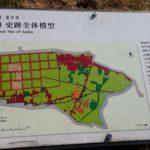 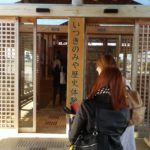 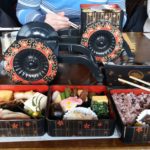 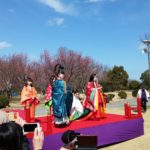 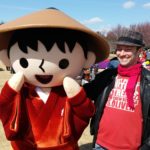