After Naikû yesterday we went to Gekû today: The Outer Shrine. In principle, this is the less important one of the two and it was probably established some centuries later only (so we are talking about the 4th or 5th century). Myth puts it like this: After Amaterasu-Ômikami, aka the Sun Goddess herself, took residence in Ise, she went incredibly hungry. So she commanded that another god, Toyo’uke-no-Ômikami, was summoned from the north of Kyoto prefecture to join her. It is Toyo’uke-no-Ômikami’s job ever since to provide her with sacred food. In order for him to do that, another forest was turned into a huge shrine area, which is now Gekû. Not only is its whole purpose to provide food for the deity, Toyo’uke-no-Ômikami also needs meals for himself. High-ranking priests offer him delicious goods two times a day. Yes, unfortunately only two times a day, because thats apparently the number of meals people had regularly when the tradition was established. So tradition can also hold you back, it is proven! The payoff for all of this is, amongst other things of course, a good harvest. So, basically, everything is about the basic need of food with these gods which I can totally rely to. We had such a great All-you-can-eat Shabu-Shabu-course in a wonderful Izakaya yesterday… also some beer (the kami are connoisseurs of sake as well, so no problem). So, yeah, it became late, and I was incredibly tired the whole day. It was really hard. So that’s why this post will be short, sorry.

But just to get the most important point communicated: The whole shikinen-sengû-deal (the rebuilding every 20 years) is exactly the same for the Gekû, and we had the honor to meet with one of the construction workers who introduced us in length to every detail of the process. It was fascinating, but also hard to listen, because I was so incredibly tired. A 10-people-team consisting of carpenters from all around the country dedicate their life to the job, because the job is never done. The main pillar of the inner hall must be from a cypress tree so big that there is a 200 years plan in advance (planting, growing, cutting) . In general, I liked the Gekû even better, I think, because you get to come much closer to the interiors, and the forest around it has even more beautiful areas to explore, I felt. And wandering around the forest helped while I was feeling so sleepy, while the sleepiness helped to make it seem much more mystical. The gods had it all figured out for me, it seemed. If you want more beautiful pictures, please use this googlesearch-link. Night night. 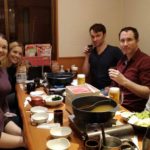 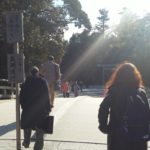 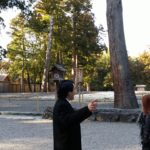 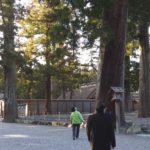 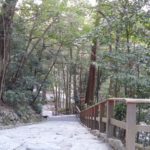