Today, after days of preparation, we have finally been to the Naiku (kôtai jingû), the Inner Shrine. Except, of course, that you can not actually “go there” or see it, since this is only allowed to the Tennô and the highest of Highpriests. From one point, though, deep in the woods, you can make out some roofs behind a high wooden wall. All of this is highly peculiar by itself, the more you think about it. Its not just us forgeigners, after all, but all these people here who are dedicating their life to Ise, whether it is those priests in training or – especially – all those scholars at the university. No one of them will ever see what this is all about, or whether the legendary item, the Yata no Kagami, really exists. So everything seems to be about the imagination (which is kind of strange after my whole attack on semiotics and referentiality af few days ago. Everything here is pointing towards some center that might as well be empty, as Roland Barthes would have put it, but it decisively isn’t, at least not in the minds of all the people here).

Anyway, the day was really beautiful, since the Naiku is much more than whatever is behind those walls. Actually, it consists of a huge area in the mountainwoods, where you can wander around freely. Not even many visitors here, at least compared with Kyoto, and I really think we were the only foreigners. There are many wooden bridges over the river Isuzu, more little shrines with incredibly stories than you can count, and those gigantic trees which are well over a thousand years old. The air tastes wonderful. But what impressed me most was the little fact that every piece of architecture, every bridge, every tôri, every wall, was soft as a velvet towel. Because everything is brand new, like right out from Ikea.

If you remember: thanks to the shikinen-rengû-tradition, which was institutionalized in the 7th century, every piece of wood in the Naiku gets torn down and completely rebuild every 20 years. Today, in its 62th version, we saw, smelled and touched architecture that is from 2013. Except that it is over 1400 years old. Just not in this particular material form. I can not stress enough what an incredible notion of “tradition”, “age”, and “time” that was. If you stand in front of an old cathedral in Europe and touch it, knowing the same stone was in the very same place during the middle ages, that is definitely impressive. But then again, they just build something, finish it, and are done with it. The rest is preservation: Keep the fire, wars, and bombs away! Here, if any of the huge wooden tôri or the wonderful bridges keep standing for longer than 20 years, something went wrong. The tradition would have died. The legacy would have been broken. And this is such a different approach. It sheds a new light on all the “performativity”-questions that Phil and myself were discussing a few days ago (thanks, Phil!). Because you have to think about the shikinen-sengû from a practical perspective, in order to see the theoretical consequences.

Craftmanship. You need to keep the skills alive. The knowledge. The trade. The institutions. The old teachers that teach the young teachers to teach new teachers. You need the places were they plant the trees, where they cut the trees, where they work the trees, and you have to train people to arrange for that again, and again, and again. And after one shikinen-sengû is finished, the preperations for the next one must start. It seems to me this is somewhat more challenging than to prevent attackers from destroying the stuff that you built. Because its not about the buildings. Its about the building. So, we are back at actually doing stuff. To me, touching this wood (that really feels like fresh out from Ikea) was like touching the essence of time. Or some essence of time. If a building is really old, it is easy to project backwards, to imagine all those lives before you that stood at the very same spot. But if you touch something that continues to be brand new, freshly cut, freshly worked, only to be torn down, soon to be rebuild again – and for over a thousand years now – the temporal perspective shifts and you project out into the future: this might feel the same in a thousand years from now. Like fresh out from an Ikea. Or whatever spaceship materials they will compare it with then. 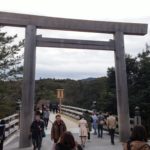 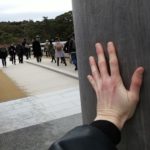 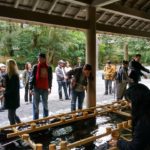 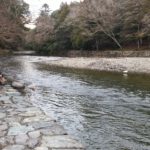 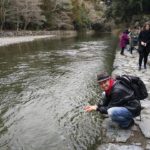 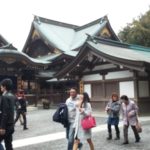 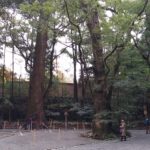 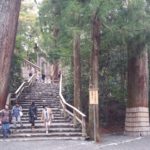 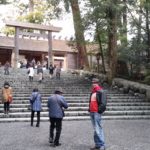 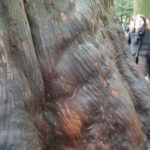 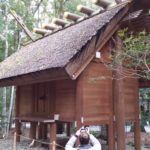 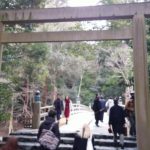 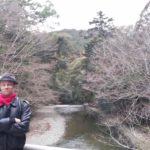 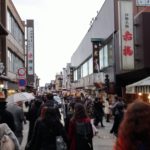 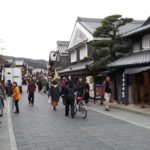 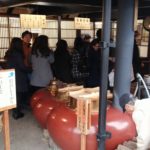 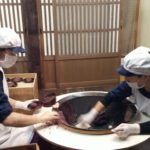 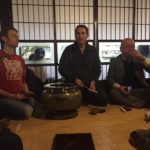 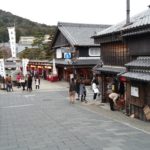 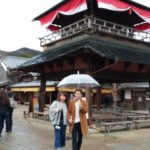