Day 11 – The Businesses of Lesser Priests

Today, some hard facts again (mixed with a good amount of storytelling and lore): the businesses of lesser priests! These guys are called “onshi”. That’s a pronounciation of 御師 special to the Ise-area. My dictionary translates them as “low-ranking priests”, and they are recurring characters in almost every lecture here. Part of the whole shinto thing with all those rituals is that you have incredibly many ranks and levels, like in Karate or something, and you can actually level-up your whole life. Or stay an onshi and do lots of business. I have a weird fascination for these guys, partly because of that translation, partly because they had some really shady businesses going on, and mainly (probably as a combination of both) because it is nice to image what they would like in a cool historical (phantasy?) comic/manga/anime (check out google image-search again! No contemporary artworks to be found)!

The general idea is that, since normal people were not allowed to enter the Ise Jingu, Naikû und Gekû, for hundreds of years, this class of lesser shinto priests served as innkeepers, tour guides and administration officers in the self-governed Yamada area since the early Heian period. They had a lot of shady deals going on: priests from all over the country were doing their pilgrimages to Ise, so they had to rely on onshi to find a place to stay once they were here. High-ranking government officials and feudal lords from other areas who wished to worship the deities had to rely on onshi to convey their prayers in their stead. They also began to visit regular people to sell talisman and other stuff in the Edo period. But in 1872 the fun was over: during the Meiji restauration and the increasing state control over Shinto, the middlemen were cut and all kind of onshi business became illegal. About 750 onshi at the time became unemployed. Many artefacts and documents related to them were lost.

This is certainly fascinating because it would make for a phantastic setting for a role playing game or something. But the onshi were also of high cultural importance, since they established libraries and schools and invited scholars to visit. Also, they more or less invented paper money. In the Edo period, there were two different money systems in Japan, in the west they were paying with silver, in the east with gold, and Ise was right at the center. The onshi thus started to produce paper money, called Yamada Hagaki, as early as 1610, only China did that before (England started only 50 years later). Over ten stamps were used on top of each other to make forgery harder, and they changed their design completely every 7. This went on for over 250 years, until that, too, had to stop in 1872. So, yeah, a phantastic setting for storytelling in various media! Anyway, today we have been to the house of Maruoka Sodayu, a former mid-level onshi, whose residence (from the Meiji-period) is the only remaining onshi-house that survived to the present day. 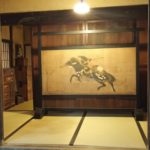 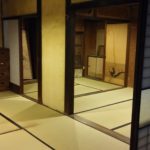 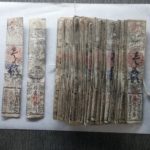 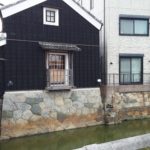 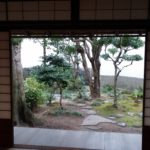 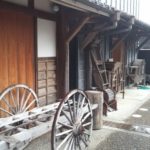 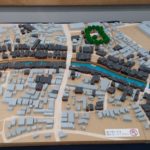