So, let’s start with a fine selection of Wikipedia-knowledge, enriched by some basics facts from Ôbayashi Taryôs “Ise und Izumo: die Schreine des Schintoismus”  (1983; Japanese family names will be given first, as usual) – let us assume my understanding will expand rapidly during the next weeks. 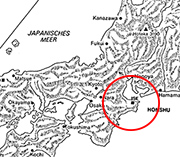 Ise is a city of about 130.000 people, located mostly within the Ise Shima national park at the eastern tip of the Kii peninsula in Mie prefecture: somewhere southeast of Kyoto, southwest of Nagoya. It is home to the Ise Grand Shrine (ise-daijingū), the most sacred Shinto shrine in all of Japan, rivalled only by the Izumo Taisha in Shimane Pefecture. The Grand Shrine is actually separated into two smaller shrines, the Naikû (or kûtai jingû, Inner Shrine) and Gekû (or toyouke, the Outer Shrine), which despite their names are separated some 7km from each other. Until 1955, the village surrounding the Inner Shrine was named “Uji”, the one around the Outer Shrine “Yamada”, combined to “Ujiyamada” in 1889 but renamed “Ise” only in 1955 due to some confusion with cities of similar names. “Ise” was chosen because the Grand Shrine of the same name was known all over Japan anyways. Already in the Edo era (1615-1867), there have been numerous pilgrimage-waves (okage-mairi), bringing literally millions of Japanese people to Ise.

So, among some of the facts that are amazing about Ise is that all the shrines get burned to the ground and completely rebuild every 20 years. This ritual, called shikinen-sengû, has been going on, apparently, since Temmu Tennô in the 7th century. The institutionalization of Ise is closely connected to the consolidation of the Imperial rule over Japan, but the Grand Shrine is much older than that, going back into myth (which I will certainly write about in a future post). Today, we can visit the 62th version of the Grand Shrine, built in 2013. The next shikinen-sengū is due for 2033, but the whole process takes about 8 years. Of course, it is not quite right that you can actually “see” the Grand Shrines since most areas of the Naikû und the Gekû are closed to visitors, only the Highpriest (the daigûji) and the Tennô family is ever allowed to enter the most sacred parts. This plays nicely into the wonderful myth that the Ise Grand Shrine is the place where one of the Three Holy Artefacts (sanshu no jingi) is located: the legendary Mirror Yata no Kagami, rumored to be somewhere inside. Together with the legendary Sword Kusanagi no Tsurugi and the legendary Pearl Yasakani no Magatama, these three items were handed down directly by the gods (Ninigi-no-Mikoto, to be precise) as the foundation of the Tennô dynasty and its paramount rule over Japan. In some way, the legendary artefacts can be said to “be” Japan, the sword representing Valor, the pearl Benevolence, and the mirror Wisdom. No one except the Highpriest and the Tennô may ever see them, so there are not even drawings around, but even in 1993 when the current Tennô Akihito was enthroned, there were two bundles of shrouded “packages” present in the room (said to be the Sword and the Pearl, so the Mirror may not have a night out in Tokyo). Anyways, there’s obviously much more to the historical, spiritual, and mytholgical significance of these things, but that’s what I am about to learn, hopefully.

Beside from all of that, Ise must be a wonderful city itself, located at the side of the two rivers Isuzu and Miya. At the nearby beachside there are two enshrined and thus also divine rocks in the water, called the Meoto-iwa, the “Wedding rocks”. Because they are married to each other. You can see them in the picture that I used for the header of this page. Because they are rocks, but also gods. This is not so highly unusual as it may sound.

What else? I’ve got a GoPro with me, so maybe I can do some fast forward-videos and similiar stuff as well. By now, I should be arriving at Nagoya airport, expect an update soon.

One Response to Day 1 – Going to Ise, the Basics